The year of great dance music without a dance floor continues.

Robyn is busy DJing at home, providing her Club DOMO experience and dropping Honey remixes left and right. SG Lewis is busy crafting some of the year’s best records, including Dua Lipa‘s “Hallucinate” and Victoria Monet and Khalid‘s “Experience.” Channel Tres is busy making Britney Spears very happy, who has recently declared him “the coolest man in the music business.”

Luckily enough for us, they had just enough time to get together to cut a collaborative tune.

“Impact,” released on Wednesday (August 5), finds the 26-year-old London-born songwriter and producer teaming up with the Konichiwa Records-founding Swedish Queen of Pop and the 28-year-old Compton-bred rising star for a sexy, propulsive, defensive dance floor throbber.

“’Impact’ is possibly my favorite record I’ve ever been a part of. The chemistry between Channel and Robyn is so powerful, and creates something so unique. Channel is an artist I believe will go on to create a musical legacy as important as the one Robyn has already created, and to have the two of them on this record together is insane. Working with my good friend TEED again on the production is amazing, as he is truly a production hero of mine. I hope it provides some release and euphoria in a time where it’s hard to come by,” SG Lewis explains of the collaboration.

“’Impact’ is about how someone can come into your life and completely change you either for better or worse. In this instance it was for the better, and I’m going through the emotions of denying something that’s obviously good for me, but the hurt I’ve been through in my past causes me to put up defense mechanisms. While I’m putting up the defenses, the person trying to love me pursues me consistently and this impacts my life in so many ways,” Channel explains of the song’s meaning.

To be fair, putting up a defense on the dance floor isn’t always bad. I believe it was the Swedish poet Robin Miriam Carlsson who once said: “Protect yourself, ’cause you’ll wreck yourself in this cold hard world, so check yourself.”

“Sam made this instant thing, it ‘s a special skill to make a song that hits you right away the way ‘Impact’ does. The track just gave me the feels and it wasn ‘t hard to write a chorus to it, especially with Channel’s vocals on there already. Channel Tres came on tour with us last year, so I know how strong he is on stage and hopefully some time in the future we will get to be on stage together, with Sam, performing this song,” Robyn adds.

While it would have been hot to hear even more Robyn on the track (isn’t “more Robyn” the theme of all music?), “Impact” is no doubt a scorcher nonetheless, and will surely go down well deep into the night at the club in 2027.

“Impact” is the second single off of SG Lewis’ forthcoming debut album, due out sometime later in 2020. And if you haven’t heard it yet, the lead single “Chemicals” is also stellar.

Close your eyes, and ride the wave… 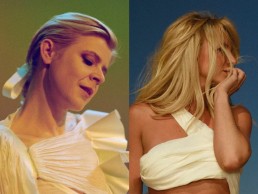 A crucial missing piece of 'Piece of Me' finally sees light of day. 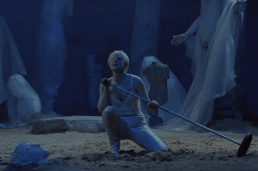 Robyn’s ‘Ever Again’ Video Is a Triumph

You'll never look at a mic stand the same way ever again.