Dua Lipa came, she saw, she did what she had to Dua, and she levitated – and then she asked Madonna and Missy Elliott to come along for the ride for a remix, with The Blessed Madonna at the wheel.

Some loved it. Some…definitely thought it was fun, they liked the beat. And some are choosing to keep their memories of Future Nostalgia untainted, without indulging any further in the Club Future Nostalgia remix album experience.

In any case, the accompanying music video for the “Levitating” remix arrived on Friday (August 14). Dua showed up. Missy showed up. Anwar Hadid showed up. Madonna…well. Perhaps she’s just taking the task a little too literally and levitating just outside of frame? At least no hydroxychloroquine or demon sperm doctors were involved in the making of this video.

Dua looks red (pink?) hot, writhing ’round at home in front of the mirror and later cuddling up to her boyfriend as the world turns underneath a giant moon, with some glowing crystal energy (?) and a recurring symbol (?) of some kind. And Missy’s having a blast, as Missy is known to do.

Sure, it would have been nice to have Madonna astral project onto the moon with some iPhone footage sent in from her bathroom or something. But, you know, perhaps there were too many quarantine complications. Or maybe she’s too busy writing that screenplay. Or maybe Lourdes finally confiscated her mother’s phone. Anyway, here we are!

The limited Future Nostalgia LP is out now.

This is a music nerd's dream.

When it comes to Madonna fans, where there's a will (and video editing software), there's a way. 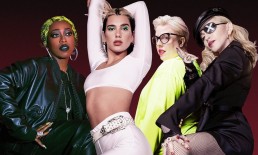 It's just Dua levitating against the music. And Madonna. And Missy. Yeah.