Madonna has kept Diablo Cody chained to a white couch in Los Angeles for weeks and/or months to work on a screenplay together.

It became apparent very soon into the process that the screenplay was, in fact, about Madonna. The Queen of Pop™ finally confirmed this herself in the form of an hour-long Instagram Live session on Thursday night (September 10).

Together with her impressively patient co-writer, who wore Agent Provocateur lingerie just for the occasion, Madge revealed that she is writing “a story about my life” in a half-Q&A, half-live screenwriting session that provided a ton of new details about what to expect…and beyond.

Much like the authentic in-person MDNA live experience, the stream kicked off late. When it finally started, Madonna and Diablo were awkwardly in the middle of their writing session. Eventually, Madonna decided to address the lessers in virtual attendance, and began with the obvious: what she’s been writing.

“Some people are asking what we’re writing. The focus is really about my struggle as an artist…living in a man’s world as a woman. The journey. Happy, sad, crazy, good, bad, ugly,” she explained to the thousands of fans watching her kick back and recall her past.

She explained that the process is “kind of like a form of therapy. Sometimes I get confused and forget that I’m writing about me, and I refer to me as ‘she.’ That’s kind of weird.”

“We talk about Andy [Warhol], and Keith [Haring], and Jean-Michel Basquiat, and the whole coming up as an artist in Manhattan, downtown Lower East Side, and the early ’80s, honestly one of the best and worst times of my life. I hope that I can portray, or express, what a thrilling time that was for me in every way. It’s important to remember that there was no social media at that time, so the way we communicated with each other was by actually going to be with each other, getting on the train and meeting up with people. Such a different time,” she reflected.

She also revealed that Amy Pascal is the producer of the movie. (Of Little Women, and “why r u punishing me” Sony email leak fame, among other things.)

The film is still very much in the works, clearly, as we literally watched her work on it with a glass of wine and dual laptops, misspelling words and improvising dialogue along the way. During this particular Live moment, Madonna and Diablo were working a scene from her time in London while filming Evita around 1995, when her sister Paula came to visit. (“If you think I’m sarcastic, you should see my sister…she’s kind of a badass.”)

“When I made the film Evita, I went to London to record a soundtrack which was a really scary experience for me,” she explained to us.

“I was totally intimidated by Andrew Lloyd Webber and Tim Rice and the story of Eva Perón, and living up to all the great singers and actresses who played her before me…I think I had a few nervous breakdowns, worrying I was going to be fired every day,” she said.

“ Andrew was not nice to me. I’m not sure he would want to be in the movie [Evita], thank God Alan Parker did,” she added.

“I had a funny relationship with London. When I first went to work on this soundtrack, London was a very different place. It didn’t have all the fantastic restaurants, everything closed down really early…it’s not as gray as it used to be. I feel like the weather’s changed also.”

At that time, she was “trapped in the hotel, always reading horrible things about myself in the tabloids, which I had to stop doing. I did make a friend, Alek Keshishian, who directed Truth or Dare. His best friend lived in London, who introduced me to David Collins, who was a fantastic architect…they were my two best friends and got me through that time.”

When asked if the upcoming movie would cover the entirety of her career, the wheels started turning internally, and Madonna started reconsidering whether it was even going to be a movie.

“Four decades. There’s no way we’re going to get four decades into a film, unless we turn it into a series. I would actually be interested to know: would people rather be interested in a film? If we did a series, they would hear everything…maybe, I don’t know,” she pondered as stoic Diablo kindly reminded her that she was hired to write a movie, not a series.

Although the experience of watching the two write on the spot was fascinating as a fan, if awkward, Madonna insisted that the process – including songwriting – is “pretty boring to watch.” There is, however, a songwriting scene in the film.

“We found a way to do it – of me writing ‘Like a Prayer’ with Patrick Leonard, all the way to the end. It’s pretty cool. All the way up to the devastating experience with Pepsi,” she said. (The Pepsi Experience!)

She oh-so-casually confirmed various events and moments and people along the way, causing a panic by merely saying them out loud, including her old band The Breakfast Club (“those turncoats,” clearly not holding onto a grudge!), Niki & Donna (!!!), Herb Ritts, and Ray of Light (“Oh yes”) – but not the kiss with Britney. Or at least, they haven’t gotten there in the movie yet.

Madonna is also not playing Madonna, in case anyone thought she would be: “I am not playing myself in this movie. That’s just not going to happen, and it’s better that way,” she confirmed.

As for who will fill her shoes in the role? “Someone who wears a Size 8,” she deadpanned.

And fear not: “It’s not a musical,” she assured us. “But there’s a lot of music. The actress who will play me singing the songs, but in places where she’s supposed to sing.”

Of course, there were the usual stan questions, including new music: “I would like to record another album. That would be so dope,” she said, although she warned that recording wasn’t top-of-mind at the moment.

The Madame X Tour DVD, however, is coming: “We are editing the Madame X Tour. Just started, as a matter of fact. Started to at the beginning of quarantine, but then things got too crazy. Everyone wanted to social distance, so I went back to New York,” she explained. (Mercifully, this was the only coronavirus mention.)

She was often hysterical, almost always without even trying: in reaction to being told she was snubbed at the Oscars, she simply said: “Which one? I’m always snubbed.” She also gave a shout-out to Brazil (RT for Brazil!), sang “Shalom Chaverim,” repeatedly bullied Diablo Cody for her fashion choices, and reflected on her own work over the past decades.

“The ’80s were super fun, but the ’90s were too. They were both dope. I feel like in the ’80s, I was much more influenced by the people, the artists, the environment around me. In the ’90s, I felt much more like I was the architect of my sound. I felt more empowered in the ’90s. But a lot of people really love those ’80s synth sounds. Depeche Mode, come on.”

When someone in the chat suggested the song “Tragic Girl” would be good for the movie, she hilariously said: “Do I have a song called ‘Tragic Girl’?” (An unreleased one, yes.) “‘Bad Girl.’ ‘Bad Girl’ is a good song.” (!)

Vulnerability? Plenty! When asked when she felt her body was at its best: “How about never? Does anyone ever feel like they have the best body? No, that’s impossible.”

The camera did a brief spin around the room at one point, showcasing her many journals and archival photographs, including one with Michael Jackson. If you zoom in closely, you can even read some of the journal passages, including a particularly devastating one about Mother’s Day, and reflecting on not having a mom.

She also grabbed a fan at some point (serious shades of “give me a fan – now“), and talked A League of Their Own: “I loved learning how to play baseball. Penny Marshall is really cool to work with. I met Rosie O’Donnell, who is one of my best friends. It was a win-win situation.”

Meanwhile, in the panicked comments throughout the night, RuPaul’s Drag Race superstar Detox was name-checked by a seemingly confused-but-amused Madonna, as was poor super-stan Michelle Visage who, quite sadly, received a most devastating “Who’s Michelle? Michelle Obama?” Oh, no…

We know so much more than we did before – and yet, there are only more questions. But fear not! She proposed/threatened the idea of “meeting again,” complete with a toast after an hour of brainstorming, badgering Diablo, and reflecting on her blueprint of a career.

And while there wasn’t (much) singing and dancing, the Live still did sort of feel as insane and overwhelming as watching her in concert – on this, the five year anniversary of seeing her opening night in Montreal on the Rebel Heart Tour, no less.

May she go Live (with supervision) again sometime soon. 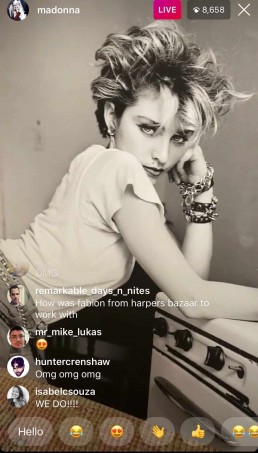 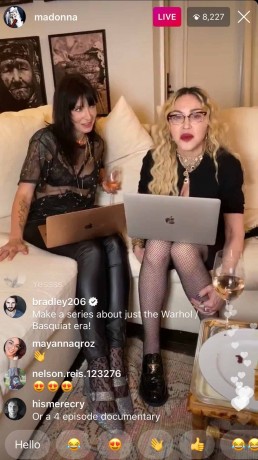 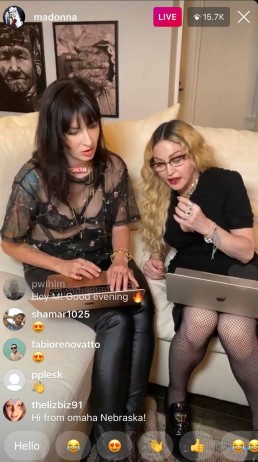 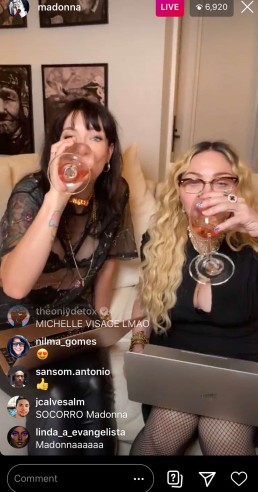 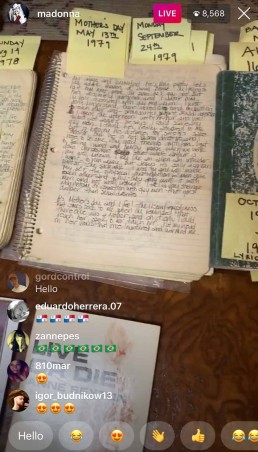 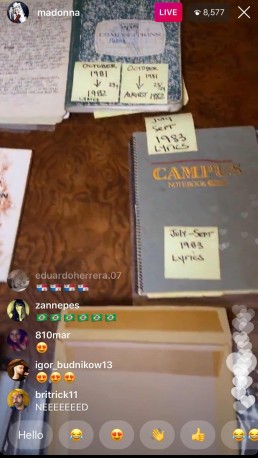 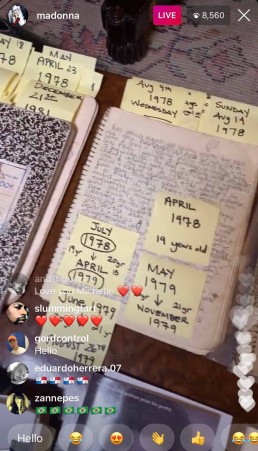 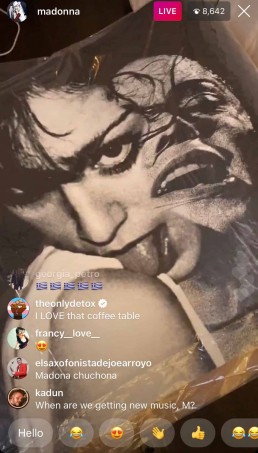