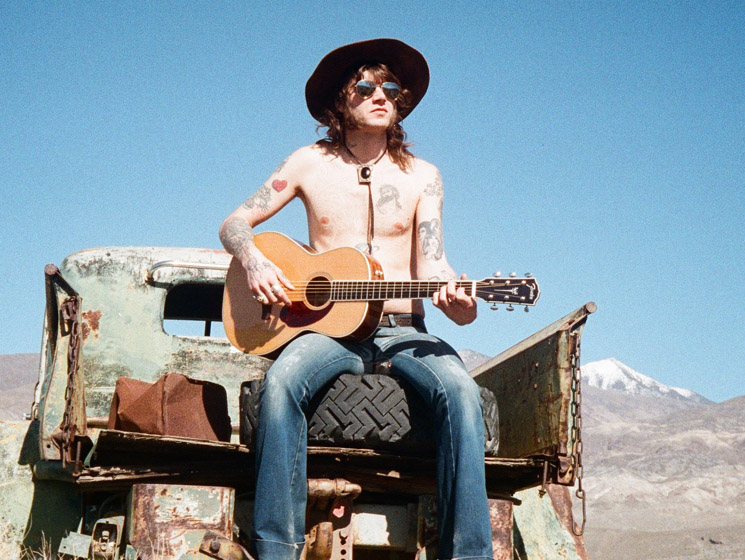 Though long-removed from their heyday, blues and country scenes thrive all around the world, including in Toronto. One the city's more intriguing new country acts is a familiar face, though not necessarily to the city's cowpokes: Blind Matty is the new project from Matt Delong, also known as Matty D, guitarist pioneering hardcore band No Warning.

There are plenty differences between hardcore and country, but both projects are part Delong's career-long penchant for jumping around the genre spectrum, exploring different facets guitar-based music. Blind Matty's debut EP, Gringo!, was released on Burger Records last May. Ahead the project's forthcoming album, we spoke with Delong about Blind Matty's origins and his plans for the project's future.

Blind Matty was born out a 16-hour acid trip.

After living in Los Angeles for six years, Delong returned to his hometown Toronto in 2013 to "handle some personal business," and a quick stint as a music producer led the musician to consider leaving the music industry entirely. "I started getting into commercial writing and all this kinda stuff that just wasn't what I was supposed to be doing necessarily," reveals Delong. "I should be playing live in front people, that's what keeps me going. That's exciting."

It was a 16-hour long acid trip that put the wind back in Delong's sails. He reminisces, "I ended up taking five hits acid because it wouldn't kick in fast enough, so I was pretty gone, y'know?" While tripping out, he listened to a series cassette tapes, including albums by Jimi Hendrix, John Coltrane and the Rolling Stones, and the resulting reaction was enough to reignite Delong's musical passion.

It wasn't just Hendrix, Coltrane and the Stones alone that formed Blind Matty. After the acid trip, Delong began poring through those musicians' influences to learn more about their music. "I started tracing the roots a little more, getting more into the Delta blues and country blues and where everything comes from."

The resulting rabbit hole introduced Delong to acts like Mississippi Fred McDowell, Slim Harpo, John Lee Hooker, Big Bill Broonzy and Lightnin Hopkins, "and then I also dug on some the Chicago blues like Little Walter, Hound Dog Taylor and Magic Sam and things. But I really like the Delta blues and country blues. I really like old country, I like music from that time period, the 1930s and '40s, whether its blues or country. Those two specifically."

Says Delong, "I've always dug '70s rock and all sorts things like that. I had a band the Nasty Souls] like that in L.A. when I was living there, so the roots music really got me re-inspired. So Gringo! is influenced by classic country music, Delta blues, classic American songwriting and themes and storytelling, but it's also influenced by California country and Bakersfield country and Flying Burrito Brothers and the Byrds. So it's just my take on roots music, and that was my first stab at doing it, my first release in this new kind music."

Future Blind Matty releases seek to continue on this path. "The new stuff is getting better, in my opinion, because how you go on, but it's still rooted in roots music and even more folky sometimes. It's still what I like to call hippies playing traditional music, like people who do drugs and play traditional music."

You never know which version Blind Matty you're gonna get live.

True to Delong's genre-defying form, Blind Matty live shows takes on a multifaceted approach, with several different incarnations the band. For some upcoming Toronto performances, Blind Matty features a nine-piece band, including 12-string guitar, lap steel, a piano and backup vocals, while other gigs feature just Delong and a guitar.

Delong is even planning on switching between several new versions the live setup, saying, "I'm actually gonna break it down and go acoustic for a second, with washboards and more traditional instruments, mandolins and guitars and pianos, not so electric. And then, I'm gonna start going electric again, maybe in the spring or summer." On a future tour, Delong posits that he "might be doing that just solo with a guitar," joined by local musicians.

On his myriad live setups, Delong says, "To me, the vision's like a country-western version Funkadelic or something. I wanna have a band that's like 16 people deep, we're all like freaks. Flying the freak flag, y'know? Playing more traditional kind music still but with some new spins on it to make it my own."

Though Blind Matty is focused on country music, he can't keep his hands f other musical worlds.

Around the same time Blind Matty was starting up, Delong found himself busy with the return No Warning, who reunited in 2013 after initially breaking up in 2005. "That's my first band, literally," says Delong, who co-founded the band as a teenager.

No Warning released the album Torture Culture last year. "We put our soul into that record and it was a lot fun to make," he says. "I'm glad it's over, it took a little bit longer than expected and by the end it we wanted to kill each other, but we go out and we play some weekends and it's a good time. We have a good time together and the shows are great."

True to form, Delong is currently contributing to a series musical projects, including rock'n'roller Tequila Jay, soul band Ride the Tiger, and a country blues collaboration with Toronto's Matthew "Doc" Dunn. Says Delong, "Blind Matty's my main songwriting vehicle and then No Warning I'm a guitar player. It's fun to jump into those shoes. I have a pretty wide spread. I play all sorts different kinds music. I wouldn't have it any other way."