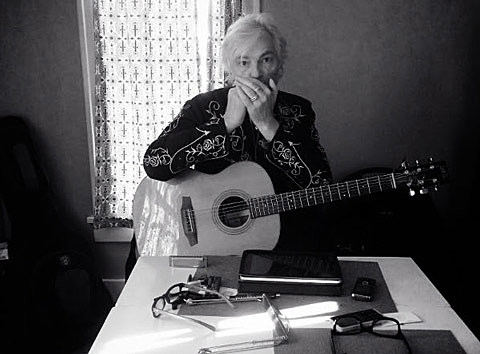 For Robyn Hitchcock's new album, The Man Upstairs, he worked with legendary British folk producer Joe Boyd (Nick Drake, Fairport Convention, Etc). Boyd suggested that Hitchcock make "a Judy Collins album," such as Elektra would have released in in the late '60s, with a mix of originals and covers, all in a spare acoustic style that showcases Hitchcock's skill with the frets and his nicely aged voice. Among the covers are versions of The Doors' "The Crystal Ship" and a particularly lovely take on The Psychedelic Furs' "The Ghost in You." You can stream that and the whole album below.

Robyn will be on tour this fall, including a stop at New York's City Winery on November 10. Tickets are on sale now. Before that, Robyn will be in New York this week for the Eugene Mirman Comedy Festival, appearing as part of the Pretty Good Friends show at The Bell House on Saturday (9/20). That's sold out though you can still buy the Eug Express Lane VIP packages that get you +1 into everything.

All Robyn Hitchcock tour dates are listed, along with the stream of his album, below...