SoundCloud didn’t have a stellar 2017.

Due to a lack a sustainable business model, the streaming music platform faced the threat bankruptcy.  Multiple top executives jumped ship early last year as the company struggled to raise enough money to keep operating.  It then had to close its luxurious fices in San Francisco and London.

In just one year, the company’s valuation fell 75%.

Underscoring the company’s poor financial health, SoundCloud later suddenly dismissed 173 employees.  The company’s co-founders then admitted to its remaining staff members that it only had 50 days cash.

After receiving $170 million in an emergency bailout package from investors, the company fired its CEO, Alexander Ljung, in July.  He vowed to remain in the company that he largely helped sink.

Listening to your favorite songs, but in significantly worse audio quality. 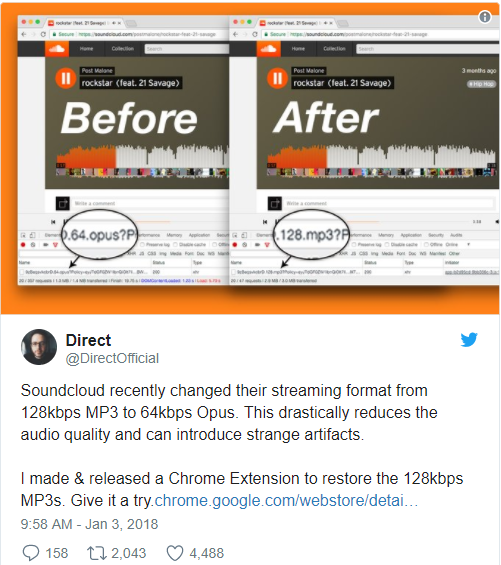 The streaming music platform has long compressed audio files to 128 kbps MP3 to speed up streams.

In a statement yesterday, SoundCloud vehemently denied the reports.

Calling them “inaccurate,” the company explained that it stores all content from creators in its “original uploaded quality.”

Lyncheski followed up his initial tweet, stating that the streaming platform may have used an older version the Opus codec.  This, in turn, produced lower-quality audio streams.

As the company struggles to regain a foothold in the streaming music market, its ‘tests’ could ultimately push music fans away from the service.