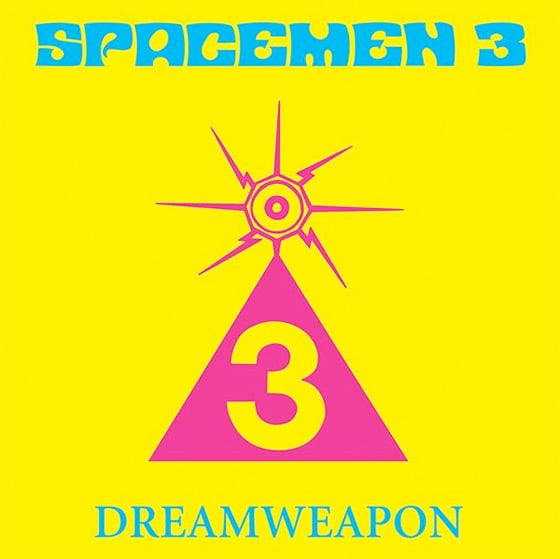 Despite a whole bunch drama erupting over the Spacemen 3 reissues last Record Store Day, the late-great space-rock heroes are set to be treated to a new re-release. On February 23, Superior Viaduct will reissue Spacemen 3's elusive Dreamweapon album on vinyl, complete with bonus tracks. This time, though, we hope the reissue actually comes with the blessing the band.

Dreamweapon was originally released in 1990 as a single-track 43-minute CD on Fierce Recordings, as well as a 12-inch vinyl splitting that track into two sides. The album was later reissued and expanded in 1995 both on CD and double-LP Space Age Recordings (the label ran by the group's ex-manager Gerald Palmer that released those controversial RSD reissues). This new Superior Viaduct reissue will now also be pressed as an expanded double-vinyl set, with those bonus tracks still included.

For those unfamiliar with Dreamweapon, here's how Superior Viaduct sums the infamous release:

August 1988, Spacemen 3 embark on one the strangest events in the band's already strange history. Billed as "An Evening Contemporary Sitar Music" (although consciously omitting the sitar), the group would play in the foyer Watermans Arts Centre in Brentford, Middlesex to a largely unsuspecting and unsympathetic audience waiting to take their seats for Wim Wenders' film Wings Desire. Spacemen 3's proceeding set, forty-five minutes repetitive drone-like guitar riffs, could be seen as the "Sweet Sister Ray" '80s Britain. Their signature sound is at once recognizable and disorienting — pointing as much to the hypnotic minimalism La Monte Young as to a future shoegaze constituency.

Along with featuring that performance, the double-LP reissue will add studio sessions and rehearsal tapes that would eventually go on to become the group's beloved Playing With Fire album from 1988. This includes "Spacemen Jam" — an epic side-long track featuring Sonic Boom (a.k.a. Peter Kember) and J. Spacemen (a.k.a. Jason Pierce) on dual guitar weaving "a side-long mediation on delicate textures and psychedelic effects."

The reissue also includes a download card and a new insert with liner notes by Will Carruthers. You can pre-order the release here.

As previously reported, Jason Pierce has been busy working on a new album from his current project Spiritualized, which he said will likely be the last from the project. Peter Kember, meanwhile, has spent more recent years producing records from Panda Bear, as well as working with fellow Animal Collective member Deakin.