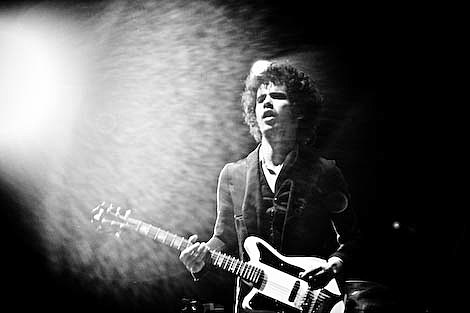 The Mars Volta, who have been on hiatus since the release of 2012's Noctourniquet, have officially called it quits, Prefix reports. Cedric Bixler-Zavala dropped the news via a series of tweets , including "Thank u 2 all VOLTA fans u deserved more especially after the way u rooted for us on this album. I tried my hardest to keep it going But Bosnian Rainbows was what we all got instead. I can't sit here and pretend any more. I no longer am a member of Mars Volta."

Cedric has a solo release on the way, and as discussed his former partner in crime, Omar Rodriguez Lopez is working with his band, Bosnian Rainbows, who will have their debut album out this year and are going on a tour in February which hits NYC for the previously mentioned Highline Ballroom show on February 19 with Marriages. Tickets for that show are still available. Since we last spoke, the band revealed a track from their album, "Torn Maps," which you can stream below.

Cedric and Omar joined forces again last year to bring back their old band, At the Drive-In. That reunion never brought the band to NYC, but it did bring them to Austin, Coachella, Lollapalooza and other places.

In related news, At the Drive-In's other half, Sparta, have returned from their hiatus and are in the studio working on the followup to 2006's Threes.